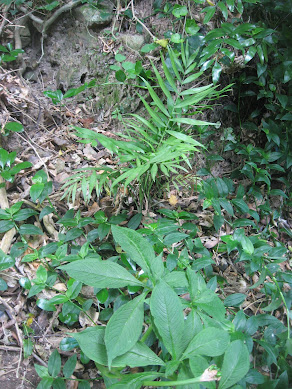 Ariasema tortuosum unripe fruit, stem and leaves visible at bottom of photo.
The pea-sized unripe fruit of Arisaema tortuosum is eaten after washing, preserving in salt and cooking in North East India according to (apparently only one) report(1).There is also a report of the fruit (apparently ripe) being eaten after roasting (2). It is very rare to get edible fruit from a plant that grows in full shade like this one does. There is also a report that the peeled stem is edible, along with a warning to cook thoroughly to neutralize dangerous calcium oxalate crystals(3).
I could not find any advice on how long you need to cook it for. I sampled the unripe fruit raw (without swallowing), it produced the characteristic feeling of needles piercing the skin on the inside of the mouth typical of uncooked aroids due to calcium oxalate crystals.
I tried boiling a few stems, leaves and fruit for 1 hour with 3 changes of water. Even after this time there was still a slight numbness and tingling in the mouth from eating them, but I was not noticeably harmed from swallowing a relatively small amount. The peeled stems were particularly good, well worth the fiddly task of peeling them, the leaves tasted good, like spinach, and the few unripe fruit seemed non-descript.
It is unclear if longer cooking is required or if they are eaten despite the slight numbness and tingling they produce. There is a report that although the tubers are eaten cooked violent illness has been known to follow eating a large amount of them (3) which may indicate not all of the calcium oxalate crystals are neutralized by cooking and they are normally eaten in moderation.
Despite this plant's highly desirable ability to flourish in very shady locations I won't be eating much of it unless longer cooking, &/or other common techniques such as soaking and drying, prove to eliminate the slight numbing effect. Further experimentation will have to wait until next year's harvest.
References.

Posted by David Nicholls at 6:41 PM No comments: 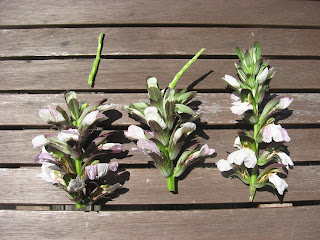 A common weed in Wellington suburbs is Acanthus mollis, Bear's Breeches.
There seem to be absolutely no references old or new to it being used for food despite being well known in Europe for thousands of years at least, noted as the inspiration for Ancient Greek ornament.
However I've found if the immature flowers are removed, the top few inches of flower stem is quite edible. It is bland in flavor and crunchy raw, when boiled it is rather floppy but tastes good, like mild asparagus. The flower stem further down, surrounded by prickly mature flowers, is very slimy and tough.
It is not especially productive but does offer variety, a contrast with the endless leafy green edibles available in the same region.
I could find no reference to it being toxic.
Posted by David Nicholls at 6:05 PM No comments: 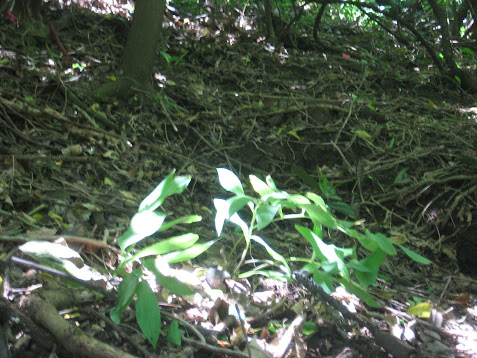 I've found Polygontum multiflorum (Common Solomon's Seal) is exceptionally tolerant of deep shade. Here it is growing with only a little dappled light in the understory of the New Zealand native tree Mahoe, Melicytus ramiflorus (very common in Wellington suburbs where native bush has been allowed to recover). It is possible there is slightly more indirect light available to this plant than in some dense Mahoe groves but you can see in the background nothing else is growing naturally nearby. This plant is also on a very steep slope, almost vertical.

The young shoots are edible (1) with a pleasant taste. The shoots are available in spring, it is not a very productive crop, you'd need a lot of plants for a good feed. The roots are fibrous but edible starch can be extracted from them, requiring cooking to make them safe to eat, they have also been used in making bread (2), I've not tried them.

Posted by David Nicholls at 4:53 PM No comments: 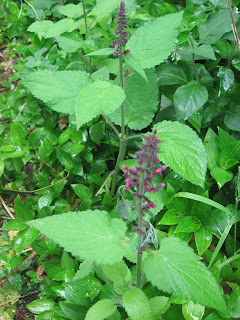 Stachys sylvatica (Hedge Woundwort, Whitespot, Hedge Nettle) is a common weed in Wellington and many other parts of New Zealand (1).

There are not many references to it being used as food but Couplan (2) states the young leaves of all Stachys are edible raw or cooked, stating Stachys sylvatica has been eaten in Europe, recommending the taste of the raw leaves after being crushed for a few minutes.

I find the leaves unpalatable raw (without crushing) but after boiling for four minutes they loose most of their kick and are pretty good, with only a slight attitude some might not like much but which I enjoy. I have eaten the large mature leaves boiled in quantity hundreds of times.

I find it is worth allowing this perennial shade loving weed to grow in the food garden as it is quite productive and can be continuously harvested a few leaves at at time without killing the plant. It grows up to 1 meter tall and does not usually cause much trouble to neighboring plants.

Posted by David Nicholls at 3:54 AM No comments: 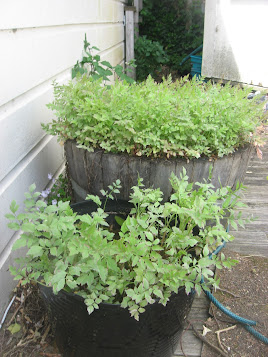 I've found the plant Oenanthe javanica (Water Dropwort, Vietnamese Celery, Water Celery) to be a highly productive perennial crop in my temperate garden, so far, I've found only Vietnamese Mint (Persicaria odorata) to be more productive and tasty.  Leaves grow back quickly after picking and it spreads quickly. It can be continuously harvested over spring, summer and autumn, much less productive in winter. I grow it in tubs as an aquatic, I have also noticed it escape into moderately moist soil nearby in the garden.

It will grow in full sun but growth is more luxuriant and leaves are noticeably softer and better to eat with some shade, 2-3 hours direct sun a day seems to be optimal.

The stems and leaves have a pleasant taste, somewhat like carrot, also seem somewhat metallic or mineral to me, in a good way. I don't think I have encountered the "white floating rhizome" which has been valued highly as food (1). I have encountered what looks to me more like a modified stem, pale green, running along the surface of the soil under the water spreading out roots as it goes, it has the same taste and texture as the stems.

I rarely if ever have to weed the tubs with this plant in it, it tends to monopolize an area, at least when grown in water (in Wellington, New Zealand). Seems like a perfect "low toil" species, requiring little or no care, ideal for "modern" gardeners, generally less accustomed to physical work than their ancestors.

Suitable for a small space such as an apartment balcony.

Government conservationists have very recently become concerned with the vigor of this plant in native water systems in New Zealand (2). I would argue the benefits of this plant outweigh the costs so hope it is never banned from home gardens. Many perfectly good aquatic food plants are already frustratingly banned in the name of supposedly virtuous native purity. Trying to restore pristine native aquatic ecosystems seems futile to me, the "weeds" have won as far as I can see.

Posted by David Nicholls at 5:00 PM No comments: 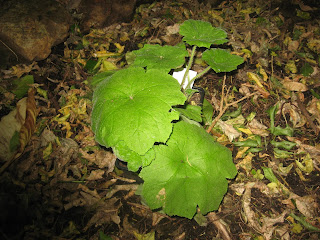 There does not seem to be any mention of Astilboides tabularis being edible on the net, however according to the book "Food Plants of China" by Shiu-ying Hu (2005) the young shoots and leaf stems are edible, used like asparagus.  I find it has a unique and pleasant taste, raw or cooked, which I'd describe as rather smoky. The very large mature leaves are soft enough to eat too and have the same flavor, I don't see why they are not eaten too.

It does not appear to be an especially productive crop but is a good plant for very shady moist locations where few other crops will grow. It is often sold in the West as an ornamental.

So a heat pump should save you $5000 dollars over 10 years assuming electricity prices do not go up over 10 years.

Lets assume you get annual cleaning for 10 years at $125 per year minimum, That's $1250 minimum, some quotes are almost twice as high.

In addition a professional checkup is recommended every 2 years costing $175 per checkup, totaling $875 over 10 years.

So the total cost of a heat pump over 10 years:

So, according to these calculations, a "good" heat pump could easily cost you $625 more than regular heating over 10 years assuming prices do not go up over 10 years and assuming nothing goes wrong with it over that period.

Posted by David Nicholls at 3:25 AM No comments: